this is an extract from the longer sober podcast “Episode 218: Bored.” Someone asked me to talk about what boredom in sobriety means, and what to do with your time. Like, how do you deal with having an empty evening?

if booze is an elevator that only goes down, then you look for the exit. and you get off, and stay off. and in some parts of the world, the signage is different. it doesn’t say ‘exit’ – it says ‘way out’ …
link > www.artsober.com 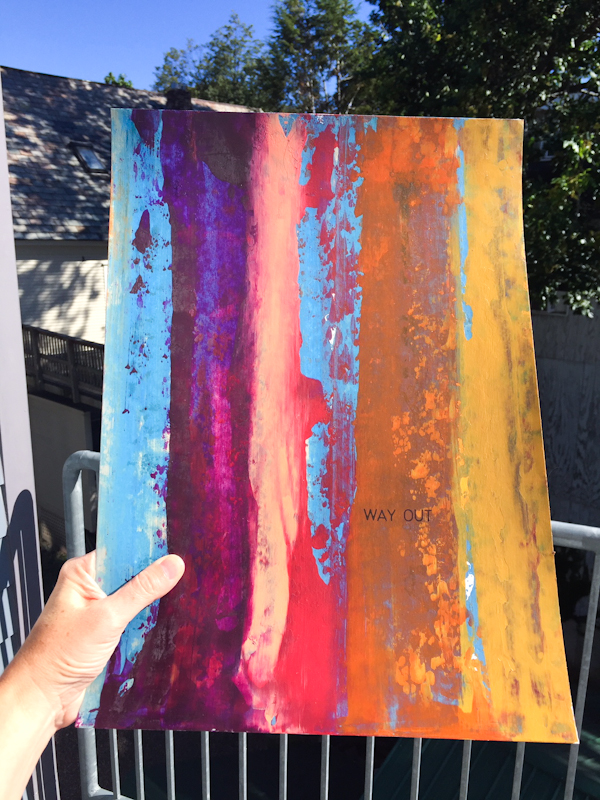 husband was away for 36 hrs (thursday to friday), which allowed me to focus on myself without distractions. the things that i can discover in this very short period of time are … well, they’re large. a large number of large-emotionally-space-taking things.

1. i’m not lonely when i’m alone, i’m pretty self-contained and can entertain myself quite happily without input.

3. the eating-late thing is from inertia. i’m waiting for him to start, he’s waiting for me (or not). i’m hoping i won’t have to cook at all if it gets too late … and while he was away? I pulled vegetarian lasagne sauce out of the freezer, the kind he doesn’t like with capers, and had that over pasta, cooked enough for two servings so i’d have an easy lunch the next day, and then – wait for it – did the dishes while the pasta was boiling.

4. when he’s not here, i experiment more, worried that i am (apparently) of the judgement of even one person i guess, didn’t notice this before, makes me try safer stuff? anyway, i made my regular banana bread (cake) recipe with a chocolate cookie base layer, and mixed in a half cup of homemade cranberry sauce into the batter. and it was quite lovely. (how could it not be.)

5. i ate and then put dishes in the dishwasher. i didn’t wait for him to load/unload. i just did it. the mental energy spent deciding to do it or not was removed. (deciding to drink/not drink every day is harder than saying having none.) when it’s just you, you do the dishes. when there’s two people (if you’re like me) you’re waiting. (when it’s just you in your head, you’re sober. when there’s you and an active wolfie, you’re negotiating.)

6. when he’s here, i ask what his plans are for the weekend and then build around him. he doesn’t ask me to do this. and he doesn’t do this for me. like today he’s working for the morning (since he was away), and then we have a new-apartment viewing (the 4th one so far, all with no luck – so far). so now that i know he’s working, i look at the time, judge what i can do in that time. so far i’ve done none of it, mind you. i’m here writing to you AND i watched 30 minutes of cake decorating videos on youtube. i can watch them for hours. but actually ice a cake? too messy to experiment. and then i’d have to eat the cake … and we don’t have the same ingredients here so it wouldn’t work out, oh how i LONG to live in a place with all-purpose flour again. if you’re from the UK and you don’t know what that is, go to google and look it up. go to the King Arthur Flour website or the Robin Hood one while you’re there …)

7. When he’s not here, i take down the nice fairy lights in the living room, hang them in the bedroom, open the bedroom window to sleep (!), and read for an hour to finish the quite-ok-not-booker-prize-y new margaret atwood book. (when he comes home, he says the light isn’t bright enough to read (on his side of the bed, which was true), and he hasn’t noticed yet that i’ve opened the window but later i’m sure it’ll be closed again. he’s a little bird that way, easily cold. whereas i’m a 53 year old woman. nuff said.)

so today, on this saturday, i’d like to find the release catch that opens the setting that allows me to behave like he’s away all the time, even when he’s here.

s’élever means to rise up, to raise yourself up. i like how the root of the word elevator is in there. and i like that it’s in french, like my guy is, he who is the maker of the art.
this is painting #588 here > link 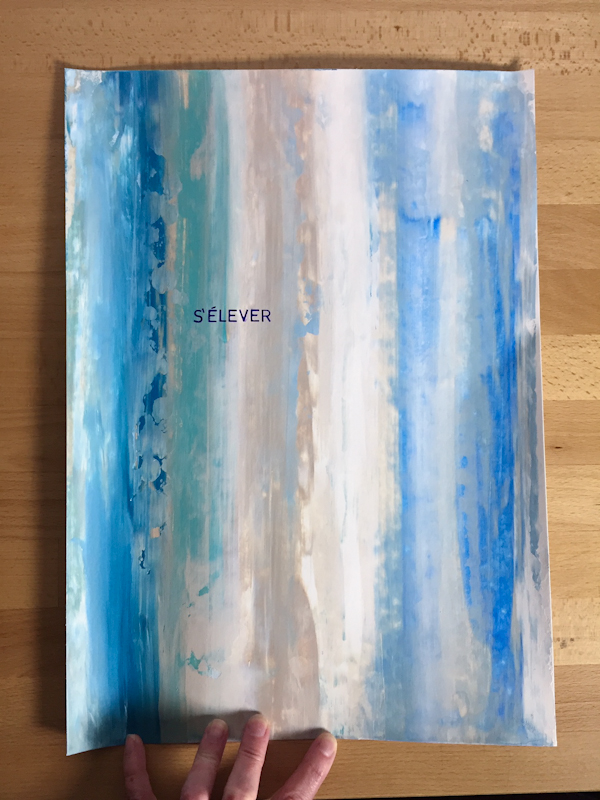 “Belle, I loved your comment to someone the other day about not drifting from supports. I feel so strong in my sobriety but I know it backfired big-time once before. That temptation to try moderation. I KNOW moderation does not work, so the decision to have one drink is the decision to have hundreds. I am still listening to podcasts and probably always will. I do some sober reading every week and probably always will. It’s part of my life, but now that I’m further along it’s not the focus of life (like in those first few weeks). I find it encouraging to read about people new to sobriety and their struggles. It reminds me of a place I never want to visit again. Thanks again for all you do. Frog”

~
from me, ok, isn’t that the best quote? I love it so much i asked the jewelry designer to make up something special, unisex, with this expression on it. and she has come up with a wide, sterling silver cuff with a distressed look to it. The Decision Bracelet / Unisex 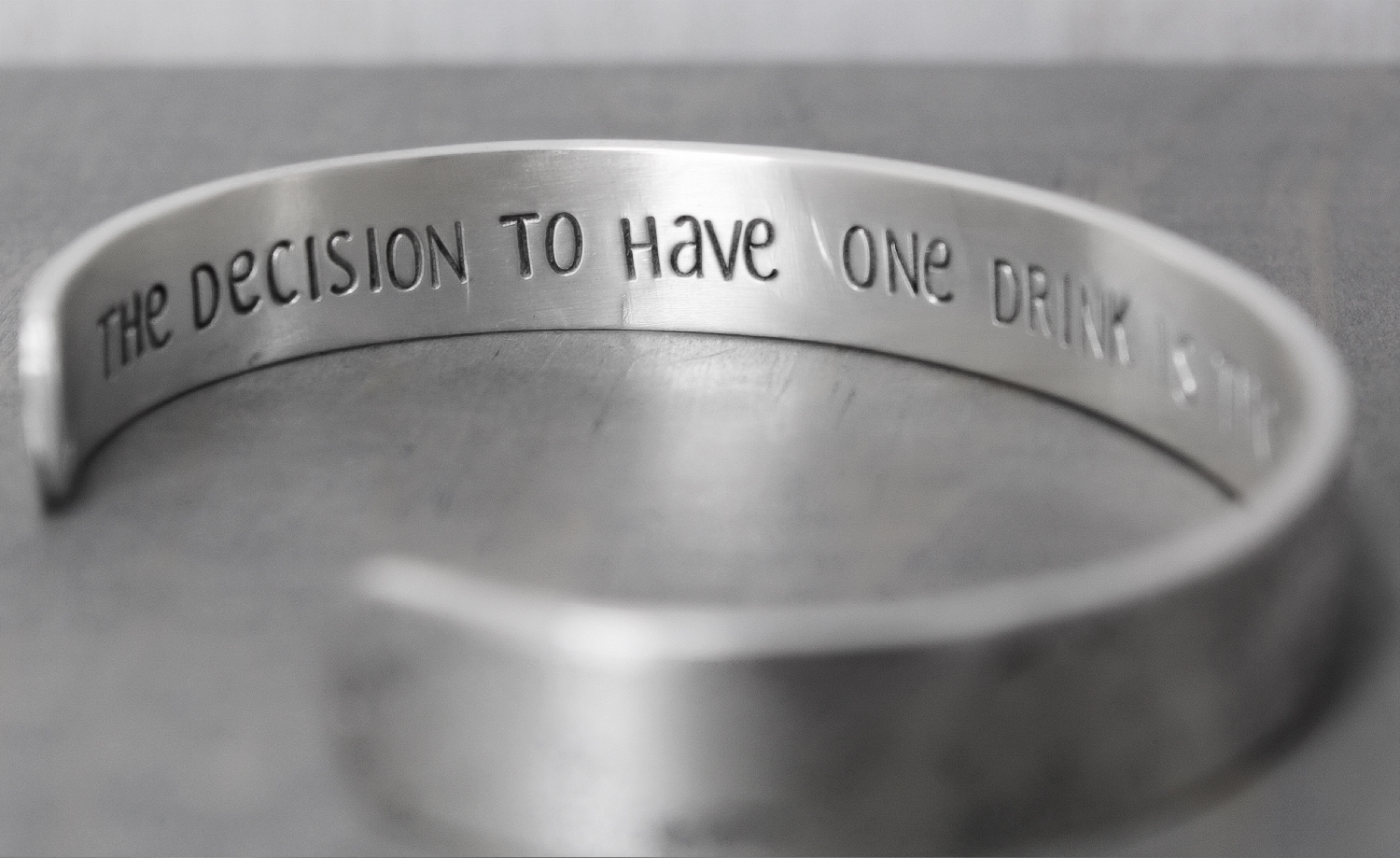 there are a few of these special edition Unisex Decisions cuffs here.

Happy to be mailing out the first 5 bracelets today 🙂 super powers are on the way!

I got a great email from Colleen in my inbox on the weekend:

Wouldn’t it be interesting if we could live out two lives — sort of like the in the Christmas Carol?  So we could see our life with alcohol, and the one where we chose sobriety?  How interesting would it be if we could see how our lives would be played out with each scenario.  What would we lose, gain?

I play this game in my head it scares me…because I know that alcohol would take everything away — my family, friends, health, finances, looks,  I am so glad I am not on that path and am choosing sobriety — the upward path.  But I know that the downward path of self-inflicted path of misery, pain and suffering is waiting for me — hiding and ready to pounce on me at places like backyard bbq, birthday parties and other seemingly innocuous places. I am grateful that I am on the path of sobriety and I don’t want to ever give up this freedom.

Had a nice time at my friend’s party … I didn’t have the desire to drink at all and this is SUCH a blessing.  I have made it this far before, but always white knuckling it — feeling deprived that everyone could drink and I couldn’t.  It is different this time.  I feel like I am the lucky one …