i’ve been penpals with Eva since August of last year. she’s penpal #2858. she signed up for support when she was already about 6 months sober. and today’s she’s on day 396.

when she came up to her one-year soberversary, she decided to post something on her instagram page about it.

which is pretty brave, you’ll agree.

even braver? she’s like a famous girl 🙂 she’s a performer, she has a fan base, she’s a public figure.

She won the Canadian Idol singing competition in 2006. She is currently touring with Brit Floyd (a pink floyd tribute show). I got a chance to meet her when her tour came through Paris in the fall. and because husband is a huge pink floyd fan, he came too. (they spoke french together!)

so after she posted this thing instagram, her subscribers went wild, lots of support, pages and pages of comments.

The french-canadian television network wanted to interview her about why she chose to share this on social media.

today, with her permission, i want to share the television interview with you. yes, it’s in french, yes you maybe can’t understand it.

but do you see her? she’s in our group. she’s a sober girl. she knows who wolfie she. she finds time to listen to her sober podcasts from the tour bus. she emails me when she’s travelling and having a shit day.

the first question the interviewer asks:

“You have decided to talk abut your ‘battle’, that you have WON, against alcohol. Why?”

“It’s something that touches many more people than we think. I’ve found that in the last few years, we talk a lot more about taboo subjects, and prejudices, especially to do with mental health issues … and I think that addiction and drinking falls into this same category, too.” 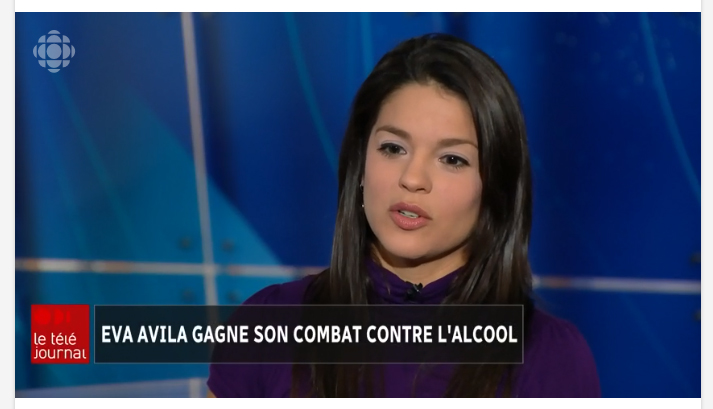 again, i’m sharing this with her permission