as i mentally scan my morning looking for something to write about, i am not coming up with any big sober lessons. what did i learn yesterday? that staying up until 2 a.m. is never a good idea. it seems like it’s a good idea at the time. like being sober, we never wake up wishing we’d stayed up to late the night before (we never wake up wishing we’d drank the night before). also the weather changed and i think i’m rebelling, in some kind of temper-tantrum way, that if it doesn’t warm up i’m not going outside. it’s been 3 days. as if i’m in charge of the weather. only in my mind does this even make sense.

i also have dead flowers on my desk, that can’t be good for feng shui, and i have a loud husband who is happily putting sober Exit paintings into the mail but is making a lot of noise doing it, and asking lots of questions. too many questions. does this one get Potential written on it? (look at the note i wrote). Can this one be mailed today? (was it in the to-be-mailed pile?) He must want attention. it’s like me with the weather. he thinks if he stands in my proximity that i’ll suddenly change into a well-slept, summery girl. and it ain’t happening.

i’m still receiving replies to my “do you want more than 2 emails a day” message from yesterday. and you know what? when I first quit drinking, i was holding on to AIR to keep me going. i was reading sober stuff 1-2 hrs a day, routinely, for the first 2 months or so. it was the glue that kept my head attached. So i remember what it’s like to have something arrive at ‘just the right time’ saying ‘the right thing’.

I’ll keep trying to do just that.

mr. p: “Hi Belle. Since I gave up drinking, I’ve been much clearer on who I am and what I want, but it does take time … I’m reminded of a guy who once told me to expect a period of feeling like a cardboard cutout. Everyone can see that it is you and recognize you, but inside you feel flat and lifeless. I think this is rather normal at first simply because of physiology. The body was used to relying on highs and lows largely controlled by alcohol and now it has nothing to trigger either highs or lows, except life itself. However, having been numb to life for so long, our receptors need to relearn how to perceive life again on its own terms. The input is there, but the desensitized receptors prevent uptake and process. However, one sunbeam or sunset at a time begin to be felt, one caress or flavor at a time begin to break through to our brains. The cardboard gives way to flesh and blood and we begin to smell the fresh flowers and feel the cool air of a beautiful autumn day. The breeze through our hair starts to feel like a gentle head massage and laughter and tears make us feel alive again.”

L: “Dear Belle, I’m emailing you to say thank you for you helping me on my sober journey. I’ve been quiet up until now as I’m quite shy and don’t like to push myself forward, after all, why would you want to listen to anything I have to say, there are far more worthy and eloquent people out there. But today I’m getting over myself and sending you heartfelt thanks and gratitude.
I’m now on day 94 and can honestly say, with your support, this has been the easiest way for me to stop drinking. Before I found your support, I’d read so many books on stopping drinking and I’d toyed with the idea of going to AA; I know it works but couldn’t bear the thought of group sharing – I was too ashamed. Now I’m ashamed to say that I thought that these sort of things don’t happen to people like me: I’m a “nice” middle class, middle aged mum of two, brought up Roman Catholic and used to following rules and doing “the right thing”. To cap it all, I am a counsellor and have supported several clients who were in denial about their relationship with alcohol, all the while discounting my own addiction. I longed to have a mentor and be part of an understanding community but didn’t have the courage to do that face to face, i am so grateful for the work you do in providing a safe place in the virtual world.
I’ve had a couple of sober periods before, but I was always very conscious of the “effort” involved, it was like a white knuckle ride at times. I now realise this was because I was listening to Wolfie. “Go on, have a drink, you’ll be fine this time, you’ve managed to break the habit so you will be able to drink in moderation again, after all you are not an alcoholic”. Bullshit, Wolfie. Over the last few months I’ve quietly come to terms with the fact that I am not the kind of person that can take or leave alcohol … Some of the things I have learned from your blog, emails and broadcasts include:
1. the only way is down – exit the elevator!
2. I used to think I would be ok if only I could stop after my third drink, now I realise it’s not the fourth drink that was my problem, it was the first drink
3. Saying “no, I don’t drink” is much easier and less of an effort than trying to drink in moderation – that was soul destroying
4. In the early stages, I repeated to myself, “I am not going to drink today” and that got me through – one day at a time. Thinking too far ahead was overwhelming…
5. Wolfie is an evil bastard and had been sneaking little thoughts and desires into my head without me even realising it. It wasn’t me thinking those thoughts about how good a glass of white wine would be to help me relax, it was wolfie putting those thoughts into my head. He was the bastard that made me think I needed wine to manage my stress levels when all the time white wine was making me feel shit about myself and not able to fully function on a hangover
Your warmth and candour have touched me and made me cry but most importantly, I feel less ashamed and less alone Thank you and hugs. L x”

shameless commercial link.   Exit –> Exist Audio Lessons. if you’re brand new to the idea of being sober, or you’re a lurker, or you’re sober-curious — then welcome. you’re here! i’m going to release a set of brand new audios especially for lurkers beginning next week. the price will be only $10, as I have received some donations specifically to support other sober folks. like you. more here > exit audios (sponsored by donations). 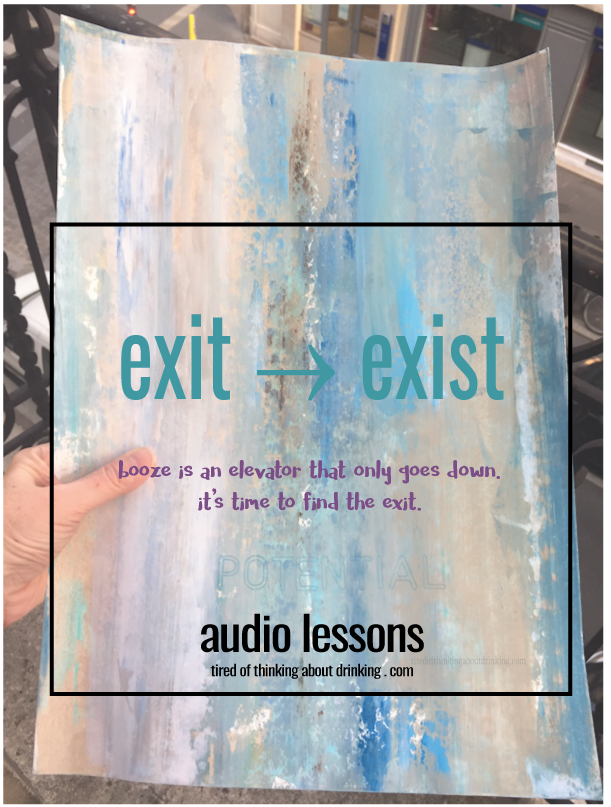