today my husband i are having a disagreement which means i have stopped talking so that i don’t say something snarky. it’ll last about 24 hrs. sort of like a flu. when i was drinking, i used to go to bed crying often, sort of a maudlin – my life sucks – kind of crying. now when we have a disagreement (where i am totally right, by the way), it lasts about a day.
it doesn’t turn into an event.

to demonstrate my sainthood, i spent 3 hrs on the sober Exit Painting site this morning, adding in ALL of the photos at the bottom of the page. I’ve also now included some place names, so you can see where paintings have landed. They’re all sold out for now, except the brand new one at the top. He saw me working on the site, so he silently made my lunch and left it in the fridge with plastic wrap. so we’re not fighting. we’ve just retreated to our respective corners.
because i’m sober, this ‘snit’ will last a day. it will not become a thing. it’s not a chasm. it’s not an event. it’s a blip.
did i mention that i was right?

now you can post a message below, and let me know: are two emails a day from me too many, just right, not enough…

KF (day 39): “Warning warning, verbal vomit ahead. I had a disagreement with my spouse earlier, the why’s and how’s aren’t important but it boiled down to him making a decision to fit him better instead of making a family decision to fit us better — but here’s where the interesting part comes in. So he makes a decision and I immediately get out my bag of resentments, it’s pretty big and pretty deep, and start thinking once again he’s making his decisions for him: don’t worry about us, don’t worry about me, don’t worry about any of that other stuff. And then I go ‘wait a minute, I mean yes technically it’s somewhat of a family decision but why do I need to tote the resentments around for his decision? I mean I make decisions all the time for the family that may or may not be the best and they impact him for sure and I make those without blinking an eye or discussing with him so why is it inappropriate for him to do the same… it isn’t…’ Bag of resentments down. May the fork be with you. It all works out the way its  supposed to.”

me: oh wowie 🙂 look at this sober girl with reflection and perspective, changing conversations MID_STREAM. um yeah, this? this is something you can only do when sober. hoo-fucking-ray for you! what a big deal this is 🙂

shameless commercial link.   Exit –> Exist Audio Lessons. if you’re brand new to the idea of being sober, or you’re a lurker, or you’re sober-curious — then welcome. you’re here! i’m going to release a set of brand new audios especially for lurkers beginning next week. the price will be only $10, as I have received some donations specifically to support other sober folks. like you. more here > exit audios (sponsored by donations). 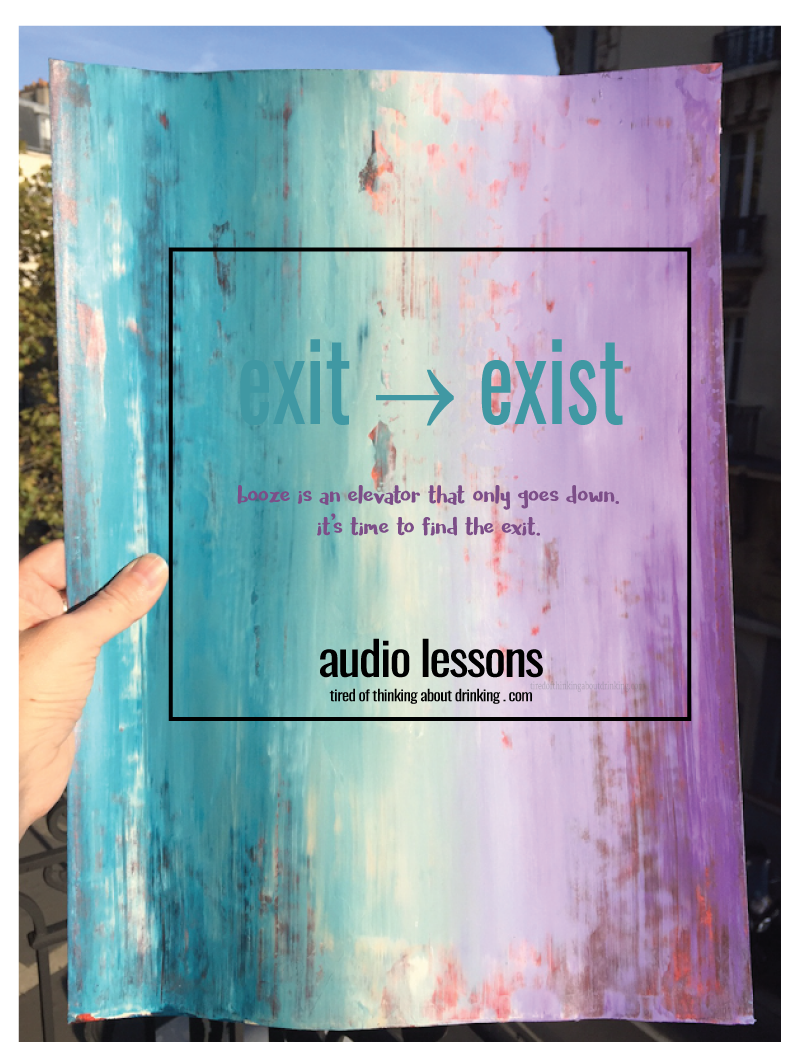