This message was sent to subscribers by email october 19th.

i didn’t ever think i’d be a sober coach. i went to university, studied english and writing, then education, then more writing. then i didn’t work as a writer or as a teacher. i returned to writing when i started a sober blog because i couldn’t figure out how to solve the problems i was having in my head – you know, the problems of THINKING. and i knew that me alone in my head wasn’t going to be useful. i’d TRIED doing it alone in my head before. for years. many. the number of times i wrote “quit drinking” or “reduce” or “learn to moderate” (or my personal favourite is the time i wrote: “learn to drink like other people”).
i never planned to have sober penpals, but one person became others. i didn’t expect to sell sober jewelry, it just sort of evolved. i made a bracelet for myself and showed it and then someone else wanted one, so i got a few more. i didn’t think i’d have aluminum and brass and silver and gold and necklaces and leather keychains.

i did not plan to write a sober book. i did it because penpals were asking for the info to be collected in one coherent form.
record podcasts? i remember the first one i did, i was so terrified. and i was certain i had nothing to say. and i had to ask my husband to leave the house so he couldn’t hear how nervous i was.

sober meetups. treat boxes. newsletters in the mail. OMM wallet cards. this really has been the best time ever, i’m not kidding.

but something changed 2 months ago. it’s not just my project anymore. it’s not just me and you. i did something unusual and involved my husband. he’s been a watcher, a newsletter folder, a dish-doer. but one day in a fit of weirdness (we were arguing, in fact, about his career), i went into his things and pulled out an Exit painting he’d done in the weeks before. and I put it up for sale on my site. it tied in perfectly with the idea of Exit the booze elevator, and the sewer images i often mention.
so i know that i’ve been showing his paintings a lot. and some of you love the ‘daily photo album’ and some of you think that enough is enough. i try to balance what you say with his face when i tell him i need more paintings. I listen to you asking for beach colours and i kindly tell him that orange and green isn’t going to work. then i post one of his orange and green ones that he’s so proud of and cross my fingers.

which is to say …

thank you. for the over 200 paintings you’ve taken into your homes. i know that it’s inelegant to promote anything on a sober site. i try to make sure that 80% of what I do is completely free, including twice a day emails, live calls, newsletters, and stuff. and i know that if i was on day 1, i’d be bored with this whole email about me and my husband. but i’ll risk it. so that i can say thanks for your support. and i don’t mean ‘money’ support, i mean ‘tell him i like them’ support. i mean the great emails you send, that i can’t even share, because there are too many of them, and it’d be self-serving ad embarrassing if i posted them all.
but anyway, this is also to say that in a world where a small-town girl from Canada ends up being a sober coach (!), well, it’s pretty amazing, even to me. and that her husband who has been a bystander would step tentatively alongside, that’s just such a big thing. it has changed our entire marriage. and i’m not exaggerating even a little.

so you’ll forgive me if i continue to be proud of him (and of us), and you’ll forgive me when i overshare the colours and photos and the new things he comes up with. you never have to buy anything. and you have my permission to delete every second email if you think the frequency is too high 🙂 but then, you know, you might miss something good! 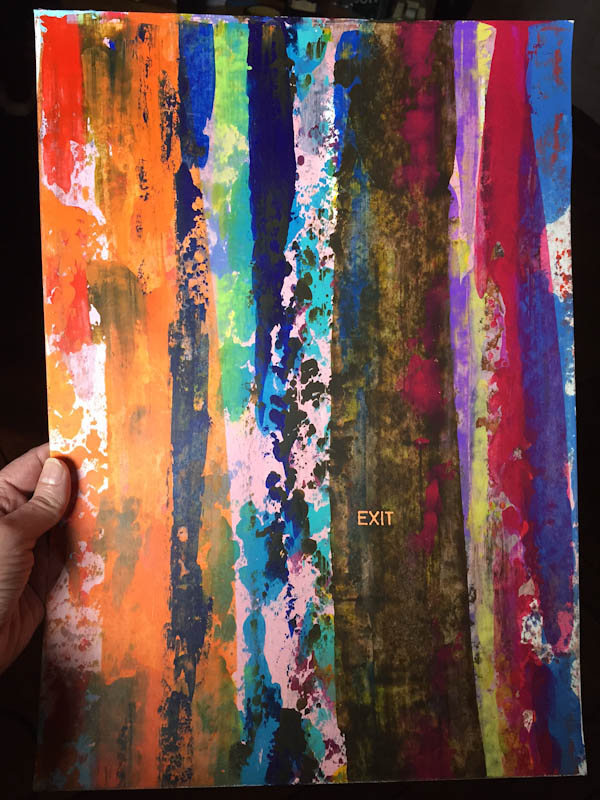 if booze is an elevator that only goes down, it’s ok to get off and stay off. this is painting #253, here.