This message was sent to subscribers by email september 16th.


sunday morning. slept 10 hrs last night and the night before, and had a 2 hr nap yesterday. thought maybe i had a sleeping illness. then thought – this can’t be jetlag 5 days later. and THEN I thought: that vacation had a high level of sensory input. i was driving a car every day which isn’t something i usually do. some days i was on an interstate with trucks up my ass, not able to travel in the slow lane as too many cars merging in from the right, and a husband saying ‘you need to switch lanes’ and i’m like: i need to travel the speed limit, not impede traffic, and still keep my head attached. no small feat.
i didn’t used to be a nervous driver, but we haven’t had a car for 9 years. don’t need one here. so when we arrive anywhere on vacation in north america, it’s after a long flight, on little sleep, I pick up a rental car, and boom i’m on the highway.
and the roads in montreal? if i tell you were trying to get home from lasalle and ended up on ile des soeurs, you’ll know exactly what happened and where. if i tell you were trying to drive straight south from vermont to new york and ended up in providence rhode island, you’ll know what happened and where.
on the way to the airport, when were finally leaving to come home, mrB is like “you need to get gas” (to fill up rental car) and i’m like fuck gas. i’m done with this.” (and it looked full enough, and was, and it was fine.)
going forward, it’s not like i can say: “i hope I never have to drive a car again” because that’s unrealistic and limiting. what if i live in Squamish? how would i ever get anywhere without a car. what if i’m doing a road trip to small bakeries along the west coast and having sober meetups along the way?
no, the goal isn’t to be car-free. it’s to have more car exposures in the next year, so that it’s not so abrupt. which means driving in paris, on highways in france. it means practising. it means slow exposure. so that when i return from vacation, i don’t need to sleep 12 hrs at a time for days to recover 🙂 at least, i think that’s what’s happening. either that or i have mono 🙂 today, after 5 days, i did get dressed. i went for a short run. we’re going out to buy new towels. posted the first german painting and it sold in minutes so have posted a second one… that’s sunday from here. over and out.

notes from my inbox:

C-J (day 184): “Good morning Belle. I’m feeling a little more upbeat this morning because i wanted to start today by writing to say a big thank you and tell you about how your influence has rubbed off on my work, and the difference it has made. which is a really nice thing for me and an indirect thank you from the people that I work with too.  Although they don’t really know about what kind of coaching you do, i tell some people that i have a personal coach, because i think coaching is very important, and I encourage everyone in my team to get coaching in lots of areas of their professional development, and i do professional coaching at work too, so they accept that i have a personal coach that I email and no one bats an eyelid about it.
Anyway, as you know from my previous emails part of our work involves sometimes finding clients of our building when they have passed away. Sometimes this can be extremely demanding on the manager of the building, who has a pretty busy day anyway, and if the death is complicated, gruesome, or is someone they were very fond of, it affects them deeply. which let’s face it is only natural as this is human beings we are talking about!
So i applied your logic about the filling up the tank before it gets empty, and got a group of my managers together and we have made a little pack and folder – and called it dealing with death – because there is no point calling it anything else, and if you are in a panic you need it to be called that when you are looking for it!
In the folder is a big print clear list of all the telephone numbers you might need, so that if you are crying you can still read them without your glasses on – a bullet point list of what to do – so if your brain freezes you don’t need to think or read the procedures, and there is a very clear message from me (their boss) telling them to make a cup tea (tea included and have a chocolate bar, also included) and then call another manager to come and help – number included.
We have also set up a quarterly support meeting to come together as a team and share good practice experiences and stories of our customers who have died – and what managers have had to deal with. We did this while we were writing the instruction pack and it was extremely cathartic, we had some tears and some laughter at some of the ridiculous things that can happen – so we realized we needed it going forward to take care of each other.
Our organization is 50 years old this year, and this is the first time we are filling up this particulate tank. We launched the packs at my big team meeting on Thursday – (the one that Boss staring crying at) and they were very well received, people felt cared for and appreciated having something ready prepared for a time of need.
Anyway my boss was very impressed so it may well become adopted nationally.
You have made such a difference to my life Belle both with my terrible head pain and over-drinking, helping me to place of more peaceful thoughtful clarity and of and of stable mood, and that helps me to help other people, so in turn you help them too.  It is a great thing that you have done. Thank you again.
Big big hugs. And hugs to Apprentice Annie too – I hope she is getting on well in her new job please send my good wishes to her.”

SPECIAL EDITION for Thanksgiving.
Thankful for being sober.
You can say thanks to yourself.
You are doing this.
This is you, helping you, to do all the things.
Each small-card painting is 10 x 15 cm (approx. 4″ x 6″) 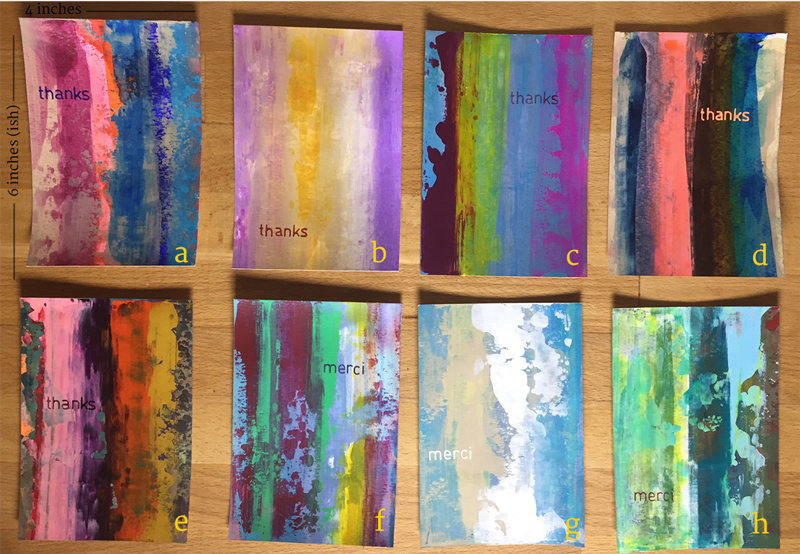